A deliciously fun card game for the entire family 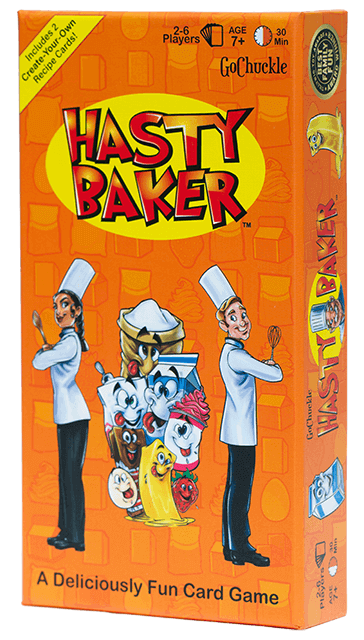 How to play
Buy now

Are you ready for the race of your life!?

Race against your friends and family to complete recipes by collecting cards containing the ingredients for a variety of delicious desserts. Be warned, ingredients aren’t the only cards in the deck! Other players may try to sabotage you with cards like Steal Ingredient and Spoil Ingredients, making this an awesome competition!

Fall in love with our characters Butter, Flour, Eggs and more as these “ingredients” magically come to life. Our recipe and Ingredient cards are designed with bright, vivid and fun characters and icons, making it easy to follow at any age.

Don’t be fooled, Hasty Baker is not just for kids. Take the opportunity to play a Strategy card to slow other players down or get lucky and pull a card that helps you jump ahead. You may just find the adults love the game so much – they keep playing even after the kids go to bed!

What’s in the box…

Cat’s may get a kick out of playing with empty boxes but we’re thinking you want more. Hasty Baker’s box includes:

Great for all ages.

A family-friendly game for any age, Hasty Baker keeps everyone entertained with fun characters and images. We challenge you to take a look at Sugar or Butter and not smile.

Kids too young to read? They too will enjoy the game and learn to read as they match the icons and characters. There’s enough strategy and sabotage for kids 6-12, teens, adults, and even grandparents to play without anyone getting bored. If anyone is yawning, it’s because they’ve stayed up so late playing! We warn you, people say the game is addictive.

Having been recognized by Autism Live, Hasty Baker is a great social activity for the neurotypical as well as those on the spectrum. It’s perfect for the classroom, playdate, whole family game night, or even adult game night!

No one likes games that are difficult to figure out..no problem here. Simply gameplay with clear instructions makes picking up the game easy. Kids will have fun learning strategy, math, reading, spelling, and critical thinking without realizing it. Designed with bright, vivid and fun ingredient cards, kids of all ages will easily identify the cards they need. Even your youngest can gather the flour, eggs, butter, sugar and other ingredients to create their favorite dessert before other bakers finish theirs.

We are so proud to have been recognized. Hasty Baker won the 2020 Tillywig Best Family Fun award, Creative Child’s Game of the Year three years in a row (2020, 2021 and 2022), and was awarded the 2021 Autism Live Best Card/Board Game. Hasty Baker was also endorsed by Food Network’s Kids Baking Championship Season 9 winner, Keaton Ashton!

What people are saying about Hasty Baker

Easy to learn a blast to play!

Super fun game. I played with my kids who are 5 and 6, they love this game. It’s easy to learn and there are sneaky cards that add twists and turns. The more people playing the more the fun but we often just play 2 or 3 people and my daughter tends to beat us even though I show no mercy. My niece is 5 and she loves the game so much she asked to borrow it for a day. She had it for a month before we got it back. And all she wants to do is play it at my house. Lol she will be getting her own copy for Xmas this year!

Fun for the whole family, young and old

I was looking for a game for the family that kids and adults would enjoy that’s not like all the other games. This game delivers. We love this game. Even their grandparents like playing this with the kids. I highly recommend this game to families looking for something else fun to play. Fun for all ages.

Fun game and easy to learn

My kids are 9, 6, and 4 and we all play almost daily. They grasped the concept on the first game and now we are all hooked. I like it because it requires critical thinking and is not solely based on chance. It is also fun for the kids since it uses everyday items and baking instead of mythical themes and new names to memorize. Well done! We will be enjoying this a long time.

This game is addicting

This game is so fun! The kiddos learned it fast and it’s entertaining to play as a family. My 4 year old son and 5 year old nephew are addicted to this game. It’s a nice change from them wanting to play on electronics all day.

We share this info but be sure to note that many Hasty Baker fans tell us their kids as young as four and five find the game fun to play! Some even adjust the play so that each game is completed in a shorter timeframe.

Everything you need to know

How to Play Hasty Baker

Everything you need to know about Hasty Baker

A Taste of the Gameplay

Shuffle the blue deck and the red deck separately.

If you’d like, you can use the box to hold the draw and discard piles of the blue deck. We designed the box to give this option to players like a tidy table. 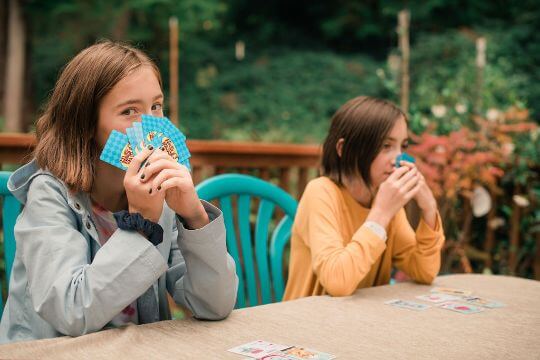 Every player gets 7 blue cards 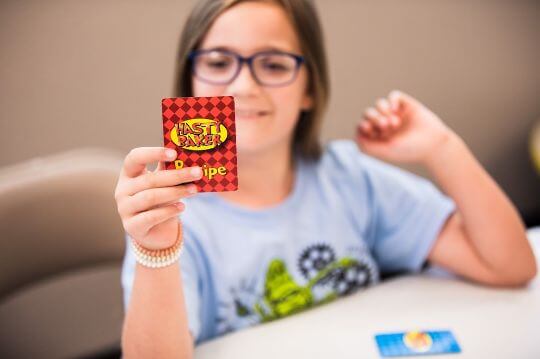 …and a recipe card

Every Turn, You get 2 Actions

Choose from these options: 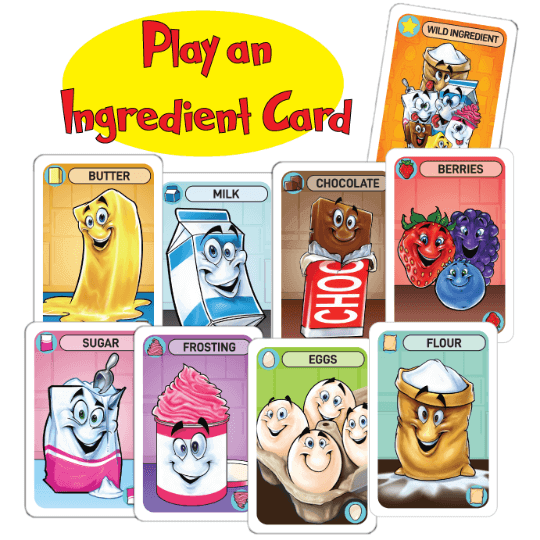 Place an ingredient in front of you to work toward completing the recipe! 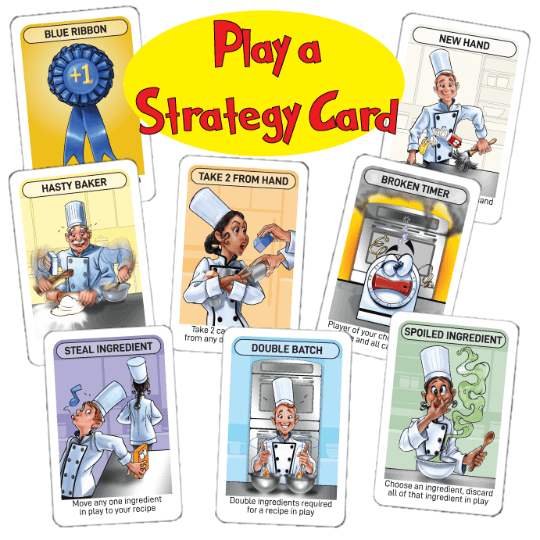 Play one of the many strategy cards to slow other players or speed yourself up! 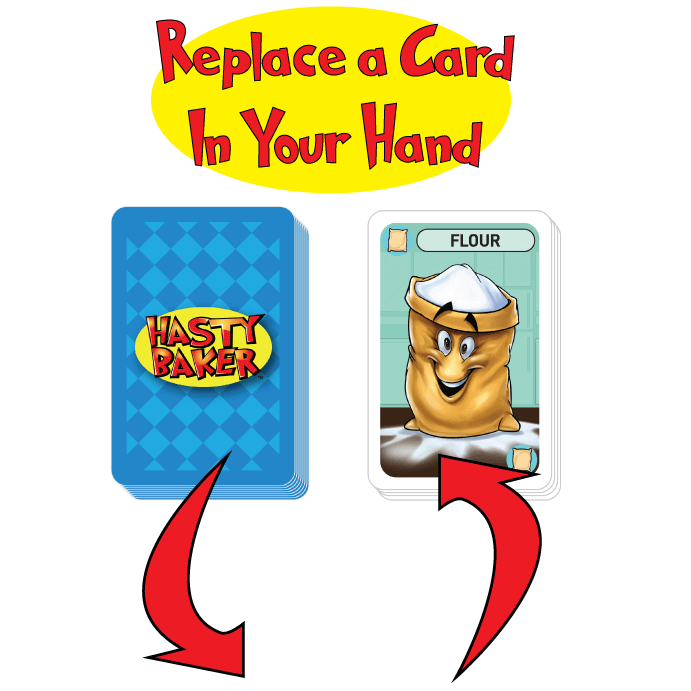 OUT WITH THE OLD, IN WITH THE NEW

Replace a card in hopes of getting a better one! 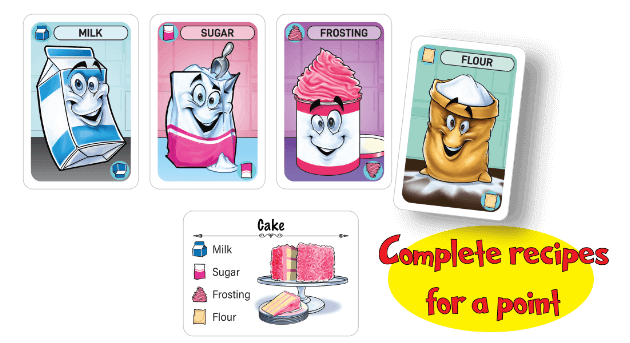 Each completed recipe is worth a point. You can get extra points by:

Both of these cards get put with the completed recipes to represent the additional point.

Download a PDF of the rule sheet so you can read the rules in detail.

Have a question not answered in the rules?

We would love to hear questions you have so we can make the rules as clear as possible!
Email us at [email protected]

Buy on Amazon
Buy on Walmart

How many players can play Hasty Baker?

Hasty Baker can be played with as few as two (2) people and up to six (6) players.

What are the best ages to play Hasty Baker?

Hasty Baker was created to create fun for all ages. Although it’s labeled for ages 7+ we have heard from parents that even their children as young as 4 enjoy playing…although they can’t read, the icons and characters make it a great matching game for them! And for the adults, there is strategy in the game to keep them entertained as well.

How can I use the "Hasty Baker" strategy card?

First of all, in the game Hasty Baker, there are eight (8) different strategy cards. One of these is titled “Hasty Baker”.

On every turn, a player gets to perform 2 actions. Those actions can be placing an ingredient in front of them to contribute toward finishing their recipe, replacing a card in their hand by discarding and drawing, or playing a strategy card. All the strategy cards except Double Batch and Blue Ribbon must be put in the discard pile to play them.

Here’s an example of what might happen on a player’s turn.

Is Hasty Baker good for children with autism or learning challenges?

YES! One of our proudest moments was being recognized by Autism Live in 2021 with the Best Card/Board Game award.

Where can I buy Hasty Baker?

Currently, you can buy Hasty Baker on Amazon and Walmart, as well as you may see it in local stores in the United States and Canada. Stay tuned as we are working to sell it in more countries.

We lost the instructions. How do we play?

I still have a question about how to play. Who can I ask?

We’re happy to answer your question, just email us at [email protected]

I remember seeing I can download a free Hasty Baker Placemat and Coloring Book but can’t find it. How can I access them?
Get your free placemat here.
Get your free coloring book here.

join in the fun

Hasty Baker is available on Amazon, including with quick and easy Prime shipping!
Buy on amazon

Hasty Baker is available in the Walmart online marketplace, with
free shipping!
Buy on Walmart

Keep your cards organized by printing one for each player.

Most of our quality clothing merch is provided through Amazon's print-on-demand service.
Buy on amazon

Most of our quality clothing merch is provided through Amazon's print-on-demand service.
Buy on amazon

For a variety of other items, we sell through Etsy. Check out the aprons, bibs, and mugs!
Buy on Etsy

Hasty Baker has been mentioned on television, magazines, blogs and more!

Learn more about us in the press

Visit in the media
Copyright© 2023 GoChuckle LLC. All rights reserved. 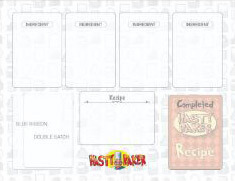 Keep your cards organized by printing one for each player.

Enter your name and email below to snag your FREE copy.
We’ll send it right to your email inbox! 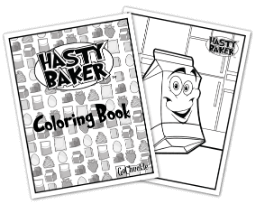 28 illustrations just waiting for a splash of color!

Enter your name and email below to snag your FREE copy.
We’ll send it right to your email inbox!

Want to get the scoop when the next GoChuckle game is available?

Enter your name and email below and we will keep you posted.